By Mike Woods in Notre-Dame-des-Landes

The French Prime Minister's plan to build a new international airport near the western city of Nantes is facing growing opposition and increased media attention. RFI visits the contested countryside near the small farming community of Notre-Dame-des-Landes.

Barricades, anti-airport graffiti and security checkpoints mark the drive into an otherwise typical stretch of countryside. Police helicopters hover above day and night, while on the ground, squatters from around France and abroad circulate in camping cars or walk with their dogs between the various campsites.

Tensions between occupiers and security forces have calmed follow two high-profile evictions in October and November. The first eviction led thousands of protesters to arrive on 17 November in support of the long-running campaign against the Socialist government’s plans for a Great Western Airport to be built here: 13,500 according to the police, 40,000 according to the organisers.

“When it was just the farmers, politicians and local people, we felt alone in the countryside in the far west of Europe,” says Isabelle Loirat, a Nantes city councillor with France’s centrist MoDem party and co-president of the group of elected officials opposed to the airport. “It changed when those young people arrived. First, the opposition started to be very different, and then the media became interested.”

Since mid-October, the number of occupiers has grown from 150 to as many as 500 at any given time. Today, they appear ubiquitous on the roads, in the fields and in the woods, building tents and cabins. “We respect their way of fighting,” says farmer Marcel Thébault. “The violence comes from the police and not from the young people, and now the relationship is very good between the young people and the farmers.”

Marcel and his wife Sylvie expect a court to order them off their land by the year’s end, so that AGO-Vinci, the public-private partnership charged with developing the airport, can begin converting their land in January. As the date approaches, the occupiers and farmers have grown closer. “Since October, some of them have set up around here,” says Sylvie. “We showed them a few places where they could build some cabins or set up a camper. ”

“For me, squatter isn’t a pejorative term, since we’ll all be squatters in January,” says Sylvain Fresneau, a fifth-generation dairy farmer and president of the group of farmers resisting the airport. Like the Thébaults, Fresneau has refused to negotiate a buy-out deal with AGO-Vinci. “We have good relations. Even though there are so many of them, they’re clean and respectful.”

Fresneau has lent the occupiers a shed usually used for farm equipment for use as a meeting place and workshop, as they reorganise and build new cabins. Inside, dozens of activists mill about between mountains of clothing, food and medical supplies sent by more than 100 support committees across the country. A meeting room has been converted into an infirmary, and the walls are notice boards announcing upcoming assemblies. Loudspeakers relay bulletins from Radio Klaxon, a pirate station that broadcasts information across the area.

“What’s happening here is extraordinary,” says Cyril Bouligand of the regional Farmers' Union, who works with the occupiers and other opposition groups. “Many battles have come together. We’re not looking for compromises. We want real dialogue, and not the false arguments Jean-Marc Ayrault has been giving for 10 years.”

The airport is so closely associated with France’s current prime minister and former mayor of Nantes, Jean-Marc Ayrault, that opponents call it the “Ayraultport”. First proposed in the early 1970s, the idea remained dormant until the 2000s, when Ayrault championed the project as part of a plan for the economic development of the Nantes region. As the scheduled building date approaches, the project’s critics, including the Green party, the Socialists’ coalition partners in the national government, are calling on the Socialists to explain the economic and environmental logic of spending 600 million euros to convert 1600 hectares of rural land into an airport for a city that already has one.

“It will have even wider consequences,” says Fresneau. “More farms will have to move to develop infrastructure, roads and traffic. These consequences haven’t been considered.”

With media attention now focused on Notre-Dame-des-Landes, Ayrault has pledged to form a commission to reopen talks on the airport. It is unclear what the commission will be able to accomplish, since the Socialists are determined to proceed with construction plans, and the opponents say there is no room to negotiate about a project that councillor Loirat calls “completely stupid”.

“Even if we have different means, we’re all united in saying the airport is useless and unnecessary,” she says. AGO-Vinci argues the current Nantes airport is heavily congested and too close to the city, while opponents claim it could be expanded and modified. They also say economic development could be encouraged in a less costly way by boosting traffic at other regional airports in Rennes, Brest, Dinard and Lorient, all currently operating at reduced capacity.

The opposition’s combination of political, legal and popular pressure on the project’s developers has taken on an added dimension with the squatters’ territorial occupation of the so-called Zad. Officially standing for Zone d’Aménagement Différé, the legal term for a geographic area marked for a developing project like the airport, the acronym itself has been renamed the Zone à défendre, or the zone to be defended. Along with the occupation comes the squatters’ own critique of the Socialists’ determination to bring the project to life.

“We often say that we are not only against an airport, but the world that goes with it,” says a man calling himself Camille, a common French name which is used by some of the occupiers to speak collectively. “A few leaders decide for everybody what’s going to be on this territory, and the people who live here cannot decide what they want for their own lives. They try to pass that off as democratic, but the people at the bottom have no power and basically have to shut up, in their opinion.”

Others are more open to speaking of their personal motivations, including Patrick, who came from Brest in Brittany after seeing the violence of the most recent eviction. “I don’t think I could vote again in my life,” he says, chopping carrots and turnips in the makeshift kitchen in Fresneau’s shed. “I voted for Francois Hollande, and it makes me sick to have done this, because it’s a Socialist government that ordered the police to be so violent.”

Patrick refers to the early morning eviction of 23 November, when 500 police dismantled the cabins built during the previous week’s mass demonstration in an operation that Interior Minister Manuel Valls likened to “stopping a cyst from growing”. Police dismantled the squatters’ structures in a handful of locations, including the Chestnut Grove, a woodlot near the geographical centre of the area zoned for the airport.

“It was a strange moment,” says Igor, walking across a patch of torn-up ground and damaged woodland after agreeing to act as a guide to the emblematic site of the occupation. “Some people were speaking with cops, others were running because of the tear gas. There are tensions between us and the cops, and the result is here.”

Further into the Chestnut Grove is a collection of eight cabins containing dormitories, showers and food supplies, where sixty activists are finishing a day’s carpentry work and preparing to spend the night. The site is a veritable fortress, encircled by forty-five tractors lent by local farmers in the week that followed the previous eviction. “One tractor from each farmer”, according to Marcel Thébault.

Igor himself arrived from southern France in mid-November, drawn by the environmental activism of the occupation. “People see what happens here and they understand that we’re not terrorists,” he says with a laugh as he gives a tour of the cabins, which are built with recycled materials and heated by natural means. “We want to change the patterns of this absolutely crazy society. This airport is not a sustainable project. If we want to fight it, we have to prove it’s possible to live in a different way, and this is what is happening here.”

The cabins sit on private property with the permission of the landowners, but were erected without building permits, leading the police and AGO-Vinci to submit a request for a third eviction, on which a court will make a decision next Tuesday. Although the wall of tractors and a heavily-barricaded service road make for difficult access, security forces could begin removing the Chestnut Grove’s cabins as early as the following morning.

So far, such evictions have made Notre-Dame-des-Landes headline news across the country, drawn increasing numbers of occupiers and strengthened links between the squatters and the farmers, who are determined to stay put. “We cannot fight and look for another farm,” says Marcel Thébault. “We can do one or the other, but not both. So today, we have not looked for another farm".

“If we fight, the main reason is not because it is our farm and because we have put in so much work here. It’s difficult to leave a farm, but we could do it if the project was good. But on every level, [this airport] is bad. Also, we are so many together to fight this project. So, we stay.”

A French government project to build a new airport on rural land near the western city of Nantes has met growing resistance from farmers, residents, politicians and activists. As public debates continue over the airport’s potential economic and environmental impact, recent weeks have seen an increasing number of opponents occupying the land. RFI went to Notre-Dame-des-Landes to meet some of the protestors. 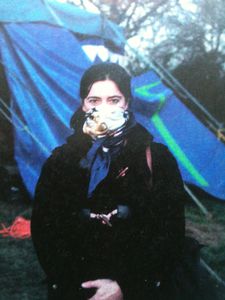 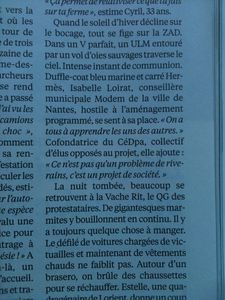 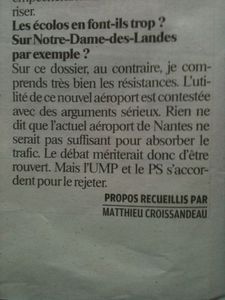